You are using an outdated browser. Please upgrade your browser to improve your experience and security.
Elizabeth Cady Stanton
American suffragist
Media
Print
Thank you for your feedback

Why was Elizabeth Cady Stanton famous?

Elizabeth Cady Stanton was an American leader in the women’s rights movement. In 1848, at the Seneca Falls Convention, she drafted the first organized demand for women’s suffrage in the United States.

What did Elizabeth Cady Stanton write?

Stanton wrote most of the Declaration of Sentiments, which called for women to be viewed as full citizens and was modeled on the Declaration of Independence. She also wrote countless addresses, letters, and pamphlets as well as articles, essays, and editorials for periodicals. She published an autobiography, Eighty Years and More, in 1898.

How did Elizabeth Cady Stanton influence others?

Elizabeth Cady Stanton campaigned tirelessly for women’s rights. Although she did not live to see her goal achieved, she led the American women’s suffrage movement for 50 years with Susan B. Anthony, planning campaigns, speaking before legislative bodies, and addressing gatherings in conventions, in lyceums, and in the streets.

Elizabeth Cady received a superior education at home, at the Johnstown Academy, and at Emma Willard’s Troy Female Seminary, from which she graduated in 1832. While studying law in the office of her father, Daniel Cady, a U.S. congressman and later a New York Supreme Court judge, she learned of the discriminatory laws under which women lived and determined to win equal rights for her sex. In 1840 she married Henry Brewster Stanton, a lawyer and abolitionist (she insisted that the word “obey” be dropped from the wedding ceremony). Later that year they attended the World’s Anti-Slavery Convention in London, and she was outraged at the denial of official recognition to several women delegates, notably Lucretia C. Mott, because of their sex. She became a frequent speaker on the subject of women’s rights and circulated petitions that helped secure passage by the New York legislature in 1848 of a bill granting married women’s property rights.

In 1848 she and Mott issued a call for a women’s rights convention to meet in Seneca Falls, New York (where Stanton lived), on July 19–20 and in Rochester, New York, on subsequent days. At the meeting Stanton introduced her Declaration of Sentiments, modeled on the Declaration of Independence, that detailed the inferior status of women and that, in calling for extensive reforms, effectively launched the American women’s rights movement. She also introduced a resolution calling for woman suffrage that was adopted after considerable debate. From 1851 she worked closely with Susan B. Anthony; together they remained active for 50 years after the first convention, planning campaigns, speaking before legislative bodies, and addressing gatherings in conventions, in lyceums, and in the streets. Stanton, the better orator and writer, was perfectly complemented by Anthony, the organizer and tactician. She wrote not only her own and many of Anthony’s addresses but also countless letters and pamphlets, as well as articles and essays for numerous periodicals, including Amelia Bloomer’s Lily, Paulina Wright Davis’s Una, and Horace Greeley’s New York Tribune.

In 1854 Stanton received an unprecedented invitation to address the New York legislature; her speech resulted in new legislation in 1860 granting married women the rights to their wages and to equal guardianship of their children. During her presidency in 1852–53 of the short-lived Woman’s State Temperance Society, which she and Anthony had founded, she scandalized many of her most ardent supporters by suggesting that drunkenness be made sufficient cause for divorce. Liberalized divorce laws continued to be one of her principal issues.

During the Civil War, Stanton again worked for abolitionism. In 1863 she and Anthony organized the Women’s National Loyal League, which gathered more than 300,000 signatures on petitions calling for immediate emancipation. The movement to extend the franchise to African American men after the war, however, caused her bitterness and outrage, reemphasized the disenfranchisement of women, and led her and her colleagues to redouble their efforts for woman suffrage.

Stanton continued to write and lecture tirelessly. She was the principal author of the Declaration of Rights for Women presented at the Centennial Exposition in Philadelphia in 1876. In 1878 she drafted a federal suffrage amendment that was introduced in every Congress thereafter until women were granted the right to vote in 1920. With Susan B. Anthony and Matilda Joslyn Gage she compiled the first three volumes of the six-volume History of Woman Suffrage. She also published The Woman’s Bible, 2 vol. (1895–98), and an autobiography, Eighty Years and More (1898). The Elizabeth Cady Stanton–Susan B. Anthony Reader (1992), edited by Ellen Carol DuBois, collects essays and letters on a variety of topics. Additional documents are available in The Selected Papers of Elizabeth Cady Stanton and Susan B. Anthony (1997– ), edited by Ann D. Gordon.

The Editors of Encyclopaedia Britannica This article was most recently revised and updated by Amy Tikkanen, Corrections Manager. 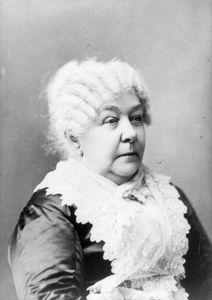